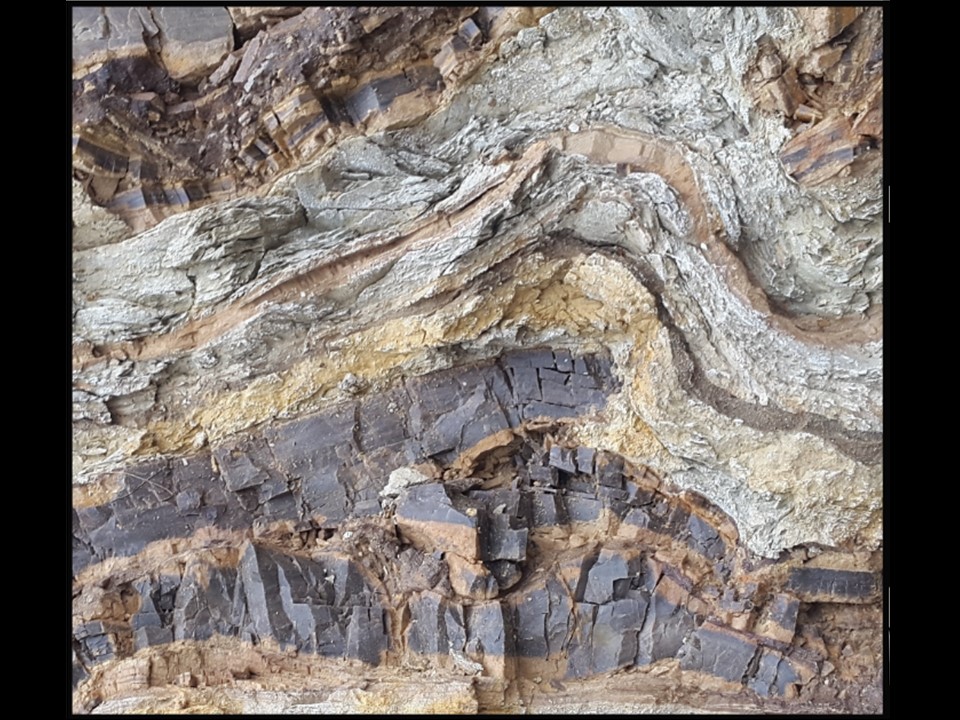 A large part of the oil and gas fields is located in foreland basins where the compressive deformation is moderately expressed (0 – 20 %). Quantifying the available space for fluid storage is highly dependent of the geologic subsurface geometries (folds, thrusts etc.). Hence, providing challenging outcrop-based subsurface structural geometries appear crucial for optimizing the seismic interpretations.

This outcrop picture is particularly well adapted to discuss Zagros-like folds where strong mechanicals contrasts change the expression of the deformation in depth. Significant « structural style » differences therefore exist between the surface and the depth in response to the lithological contrasts and the related rheologies. In consequence, seismic imaging in such context is challenging.

In order to generate ideas and discussions, we assume that the surface is at the top of this image. We observe that dip surface data are not relevant to (conceptually) calibrate the seismic in depth  …

The picture is 1 meter – wide.  The outcrop is composed of layered carbonates and shales that have been folded at around 3 km of burial depth. The carbonates have been silicified by fluids during burial, leading to a spectacular brittle mechanical behavior in the lower part of the picture (thrust and fractures). Outcrop location (.kmz) is available on request (France). The south is to the right.

HOW COULD WE USE THIS PICTURE?

We speculate on subsurface reservoir location, this latter could be located into the lower « brittle-style carbonates » where the thrusting is effective (labelled in grey). The top seal should be the shales where the dip data can (for instance) be recorded from the surface (field study). Note that intra-shales reservoirs (in grey) can also exist at shallow depth. This study case seems relevant for discussing many Kurdistan fields.

The top seal continuity (shallow shales) is close to be preserved despite the moderate shortening of the system. As a function of the well location, the borehole can « meet » the shales below the « brittle carbonates reservoir »,  just underneath the thrust zone.  This kind of well data interpretation is ubiquist and has been made in many boreholes in such tectonic setting (fold and thrust belts).

How about the main thrust? Is there any reservoir compartimentalization related to this feature? Are there any sub plays related to this reservoir compartimentalization? Faulting in low porosity rocks is expected to increase the structural porosity and permeability, in particular into the fault damage zone (e.g. Caine et al., 1996). However, in this case, we do not have any data regarding the mineralization into the fault damage zone, this latter could « kill » the reservoir porosity.

This outcrop shows a clear relation between thrusting, folding and fracturing that is almost impossible to predict using seismic-data analysis and seismic lineaments mapping (due to the seismic resolution). Sandbox modelling is useful to predict subsurface seismic-scale geometries but seems unable to predict fractures distribution and attributes at this stage (needed for DFN building). Understanding fracture distribution in such outcrop can shed light on the uncertainties related to structural model building, in particular the Discrete Fracture Network (DFN) one.

In this study case, the fault hanging-wall (upper faulted block) is significantly less fractured than the footwall where a  complex pattern of  structural heterogeneities is recognized (sub-seismic-scale faults and fractures). At least, three « families/origins » have been recognized:

– The bed-perpendicular ones are preferentially located in the upper structural block (fault hanging wall) as well as into the footwall. Their occurences is probably related to secondary strength and mechanical decoupling leading to local extension. They are expected to provide an efficient structural porosity and an important structural permeability into the reservoir. This fracture set seems confined to the reservoir carbonate unit.

– The strata-paralell ones are related to tectonically-related stratigraphic discontinuities  leading to flat faults (palier de faille).

– The thrust sub-paralell ones can be interpreted to be a « fault damage zone » in the sense that their density increases at the vicinity of the thrust. Open, mineralized or partly-mineralized fractures? Fluid barrier or fluid pathway? This should be investigated using core data apropriate analysis as well as Bore Hole Images (BHI) study.

This outcrop picture and its interpretation could be useful to discuss Zagros, Rockies or Andean fold and thrust belts.