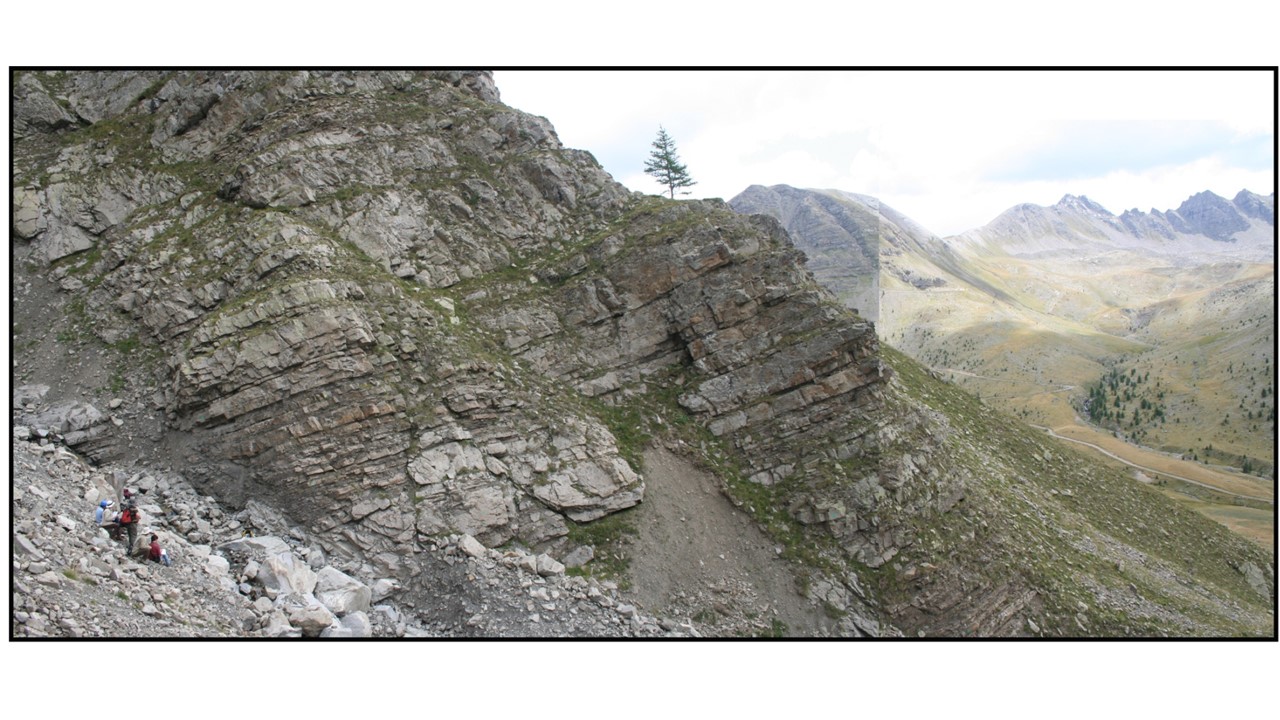 Fault zones are one of the main structures responsible for partitioning sedimentary basins and geologic reservoirs (Corrigan,1993; Fisher et al., 2001). Understanding and predicting their function in fluid migration is thus an important issue in predicting reservoir quality. Parameters controlling this function involve the permeability and thickness of the fault rock, the type of fluid permeating through it, the pressure difference across the fault, and the considered time scale (e.g., Faulkner and Rutter, 1998; Cavailhes et al., 2013a).

This outcrop picture is particularly well adapted to discuss the sub-seismic-scale structural architecture related to a seismic-scale normal fault affecting a turbidite succession in deeply buried conditions. Indeed, accurately describing the fault zone structure (such as the damage-zone width and attributes, the core-zone width and attributes) is almost impossible using a common  >20-50 m seismic-scale resolution. Studying such outcrop in order to unravel the (i) sub-seismic scale architecture, (ii) the fault rock type, (iii) the fault rock petrophysical properties appears crucial in order to contextualize your 2D core data.

In order to generate ideas and discussions, we assume that the surface is at the top of this image. We have measured that the normal fault displacement is 32 meters, therefore meaning that this feature can be identified as a fault trace slightly displacing the sedimentary reflectors on a seismic profile (but not its internal architecture).

The host turbidite succession is composed of (1) homolithic bodies composed of meter-thick sandstone beds and (2) heterolithic intervals with tens of centimeters–thick alternating sandstone and pelitic layers. The studied outcrop exposes two main normal faults « the Point Vert » (on the left) and Névé faults (on the right, the latter divided into two branches) which dip southward approximately 70° and 60°, respectively. The normal displacement is 32 m (105 ft) for the Point Vert fault and 14 m (46 ft) for the Névé fault. Three normal faults with meter offsets occur between the two major faults. These normal faults have been formed under deeply buried reservoir conditions (Cavailhes et al., 2013a). The .kmz file showing the outcrop location is available on request. 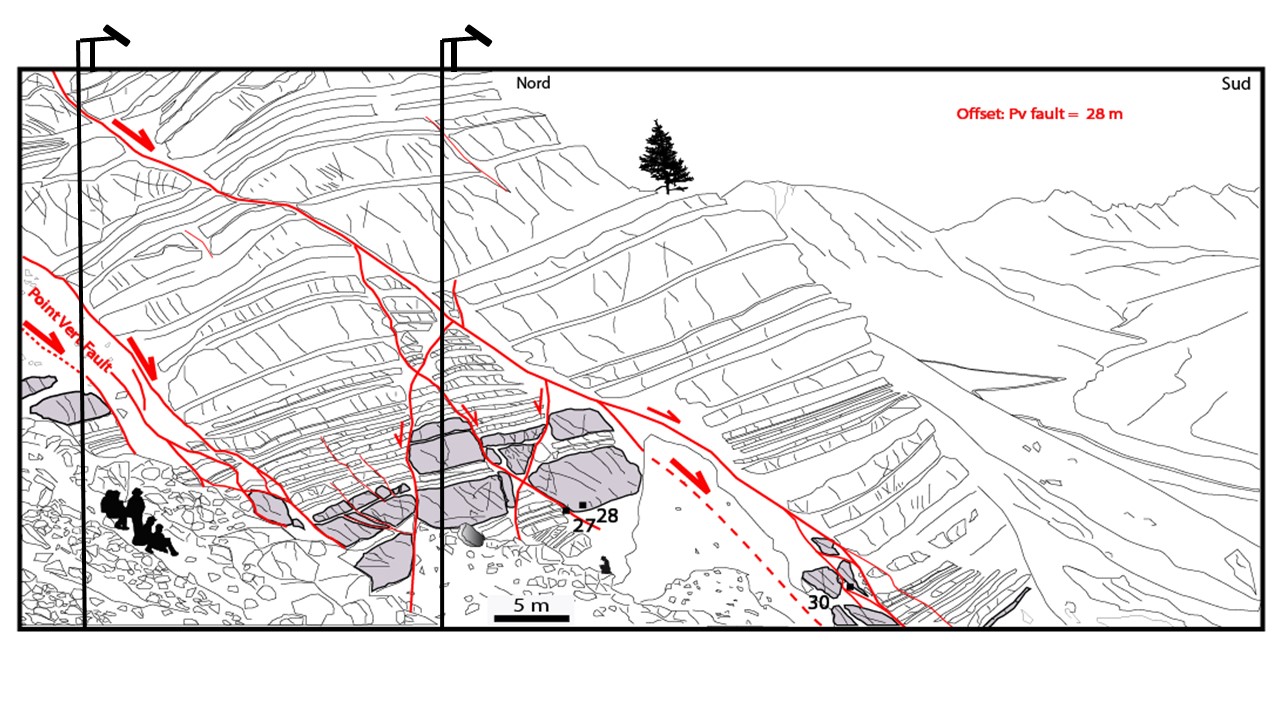 How could we use this « normal fault » interpretation?

Theorically, at shallow depth, the entire studied turbidite succession can be considered as a potential reservoir (high porosity, turbidite lobes facies). The seismic signal associated with the studied turbidite succession could be nicely layered on a seismic profile assuming that the contrast of impedance can be important between the pelitic rocks and the 5 m- thick massive sandstones. However, on this outcrop, the strong diagenesis related to the depth of the fictive reservoir (5 km) would probably hide these contrasts during  seismic profile interpretations. Host rock porosities are extremely low (around 2%), therefore meaning that only the structural porosity (related to fracture aperture) can be productive in our study case. The top seals as well as the source rocks cannot be discussed based on this outcrop description that is focused on intra-reservoir compartimentalization.

Both  of the fictive wells have encountered the footwall as well as the hanging wall of a seismic-scale normal fault. According to the measured offset (32 m), only the Point Vert fault is expected to displace the seismic reflectors and therefore be clearly visible during seismic profiles interpretations. Based on its displacement value (14 m), The Névé fault (southern fault) could be mapped as a seismic lineament using, for instance, seismic attributes extraction from a seismic volume. However, it is also probable that both faults would be mapped as a single fault (>45 m of displacement) assuming that they trend parallel and are separated by only ≈ 25 meters of horizontal distance.

This study case could be relevant for discussing sub-seismic-scale fault architecture as well as deformation mechanisms during normal faulting in deeply buried reservoir conditions (e.g. Gulf of Mexico turbidites).

This outcrop shows a relation between normal faulting and fracturing that is almost impossible to predict using seismic-data analysis and seismic lineaments mapping (due to the seismic resolution). Sandbox modelling is useful to predict subsurface seismic-scale geometries but seems unable to predict fractures distribution and attributes at this stage (needed for DFN building). Understanding fracture distribution in such outcrop can shed light on the uncertainties related to structural model building, in particular the Discrete Fracture Network (DFN) one.

In this study case, both the fault hanging-wall (upper faulted block) and the footwall (lower faulted block, on the left) are moderatly fractured (around 1 trans-sandbody fracture per meter).  A  complex pattern of  structural heterogeneities is recognized (sub-seismic-scale faults and fractures).

This well is crossing both the Point Vert and the Névé fault. Finding a rubble core on more than 1-2 m (3-7 feet) long seems very logic when crossing such faults. Into this rubble core, you will find mineralizations of quartz and calcite as well as newly formed phyllosilicates that are related to feldspar alteration (Cavailhes et al., 2013b; Buatier et al., 2015). The presence of a fault gouge explains the erodability/weakness of such part of you core. The sandstones located between the two studied faults is highly fractured by non-mineralized structural heterogeneities. These latter features could provide an efficient structural porosity and an important structural permeability into the faulted reservoir.

Finding a highly damaged core interval on several meters when crossing the fault-zone seems probable according to the m-scale displacement normal faults that are recognized between the two main Point Vert and Névé faults. Thanks to the fault architecture, we assume that the rock volume localized between the two faults can be « structurally » porous and permeable into the faulted reservoir.

Assessing the « fault damage zone » attributes is necessary to discuss the hydraulic behavior of such fault (low porosity rocks <15%).  Open, mineralized and partly-mineralized fractures have all been recognized in this fault zone. At the vicinity of the main sliding plane (≈ 1m wide), most of the fractures have been completly sealed by quartz and calcite at around 250°C. The outer damage zone and the surrounding host rock have an interresting background fracturing which appear open (not mineralized fracture aperture) at the surface. Applying a confining pressure would partly close these features at significant burial depths.  All these observations  should be investigated using core data apropriate analysis as well as Bore Hole Images (BHI) study.

This outcrop picture and its interpretation could be useful to discuss Gulf of mexico deeply buried turbidites systems where normal faults are ubiquist.