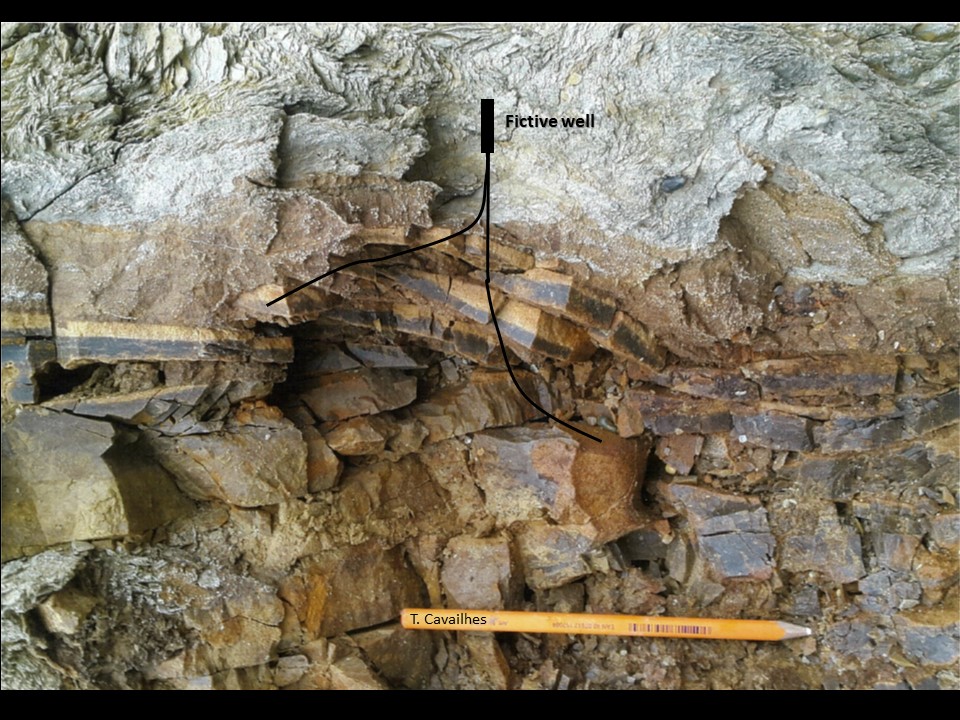 Naturally fractured reservoirs occur worldwide, either in basement rocks, in deeply buried sandstones or in most of the carbonate reservoirs. Assessing and discussing their hydraulic attributes remain challenging, in particular using seismic data in which the accuracy of the resolution does not allow to address their distribution with confidence. Storage, injection or production are highly dependent of fracture connectivity, density, and apertures. Fracturing can occur in response to many parameters that need to be understood such as the regional tectonic setting, folding, faulting, deconfining phases etc. We propose this outcrop picture to discuss the relations between folding, fracturing and reservoir tectonic thickening in a layered succession where strong mechanical contrasts are observed and reservoir matrix porosity/permeability are probably very low.

The host succession is made of cm-thick brownish to yellow decalcification clays and cm-thick grey layers of flints. The slight structural fabric developped into the decalcification clays suggest that the deformation postdates the alteration. The cm-thick layer of flint have been deformed under a brittle regime (fractures) whereas the clays have been deformed under a relatively soft/ductile regime. This latter point is interesting for discussing analogies with seismic-scale subsurface reservoirs using the Self-Similarity concept (e.g. Mishra and Bhatnagar, 2014). 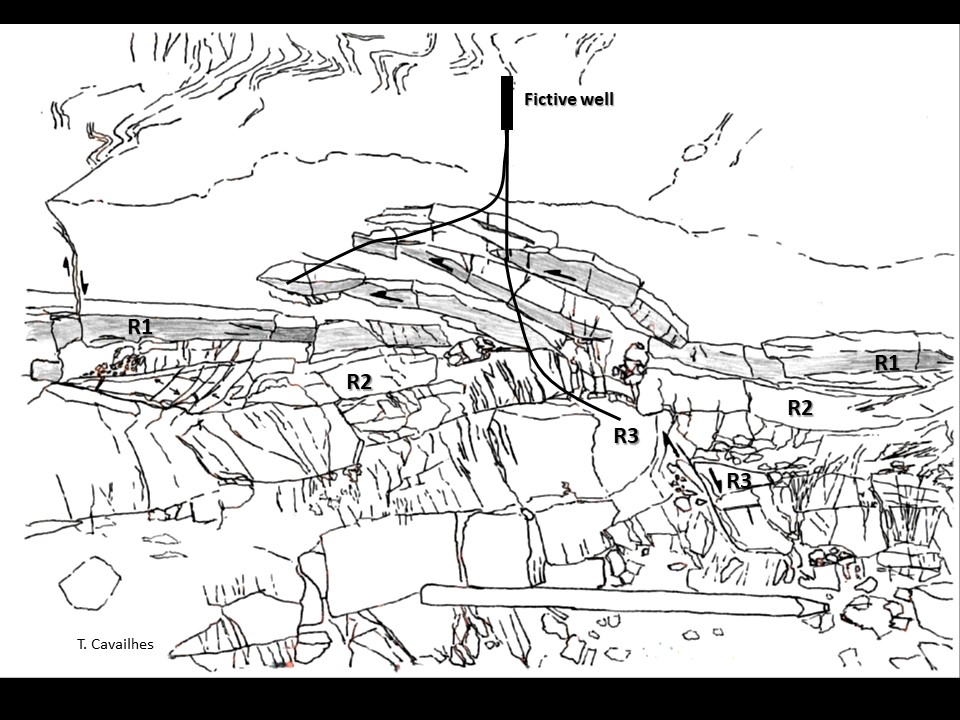 How could we use this outcrop interpretation?

The studied succession could conceptually reflect an alternation between fractured reservoirs (R1, R2 and R3) and seals, assuming a “self-similarity*” concept. R1 is located into the inner part of a compressive structure, where the deformation is highly developped and expressed by a repetition of thrusting such as commonly described in duplex structures (e.g. Cavailhes et al., 2015). Could we consider this as a tectonic reservoir thickening? Underneath this complex system, R2 and R3 appear to be affected by normal faulting, probably predating the duplex acitvity because this latter is not displaced by this extensive feature. Could the normal fault displacement have generated a mechanical discontinuity (a wedge?) localizing the future overlying duplex structure? Thinking about this hypothesis could be constructive for interpretating seismic data in inverted foreland basins such as cleverly suggested in the works of Yassaghi and Madanipour (2008), along the Mosha fault of Alborz range (Iran).

This outcrop shows relations between normal faulting,  fracturing and thrusting that are almost impossible to predict using seismic-data analysis and seismic lineaments mapping (due to the seismic resolution). Sandbox modelling is useful to predict subsurface seismic-scale geometries but seems unable to predict fractures distribution and attributes at this stage (needed for DFN building). Understanding fracture distribution in such outcrop can shed light on the uncertainties related to structural model building, in particular the Discrete Fracture Network (DFN) one.

Using the outcrop sketch, R2 and R3 potential naturally fractured reservoirs seem more fractured than R1. The extensive deformation was probably expressed by normal faulting leading to (1) a fault core, (2) a fault damage that is around twice the fault displacement and function of the mechanical layer thickness and (3) a bakground fracturing.

R1 is also fractured but some of them appear tilted with the strata (e.g. the right flank of the duplex). The fractures in R1 would be inherited from the extensive phase whereas the three main thrusts would develop later without any significant and additional fracturing phases. This observation should be taken in account during static fracture reservoir modelling.